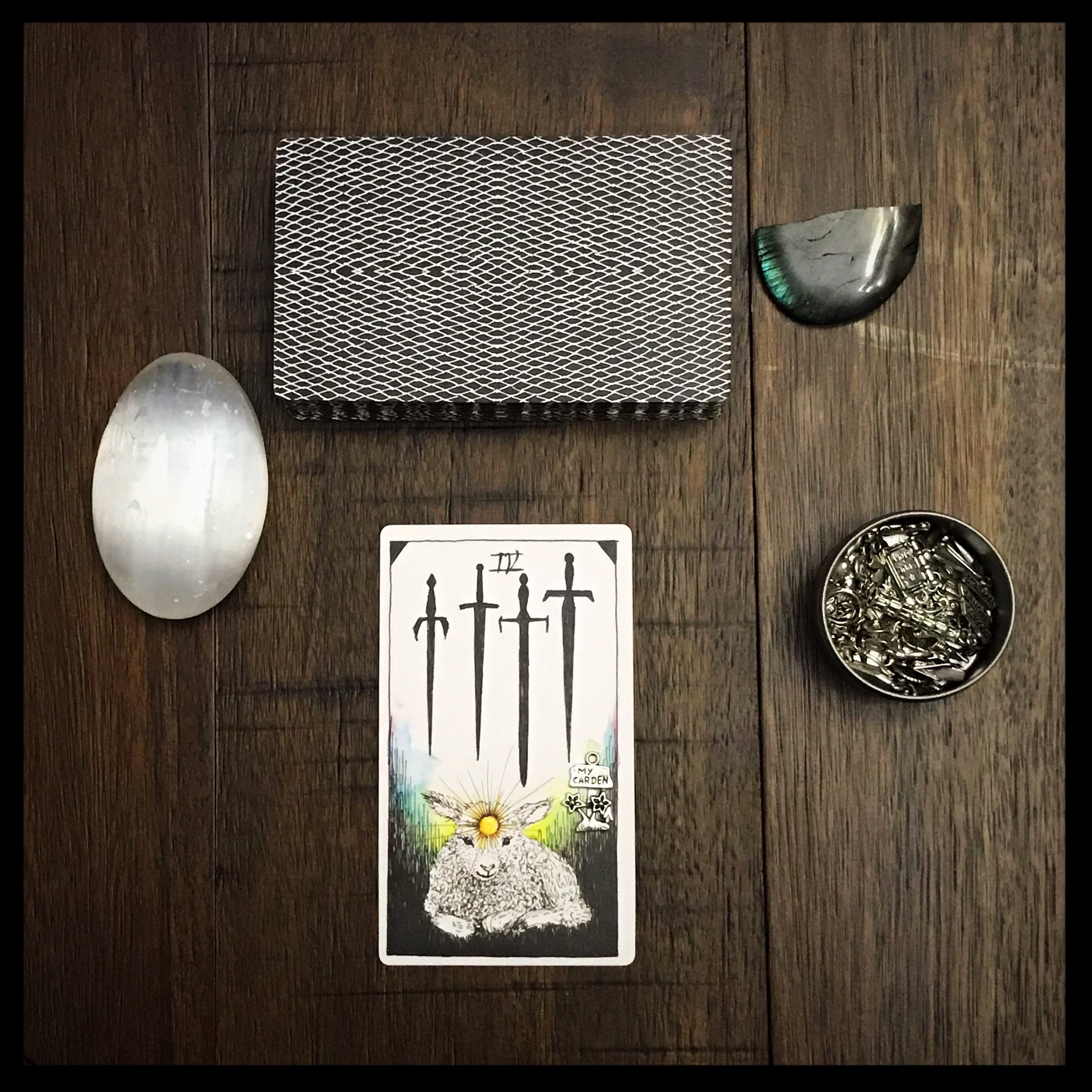 It's a Wild Unknown Day! That's not surprising to me, I've had animals on the mind. I've wanted to adopt another dog, but then a family friend posted that she needs to rehome six one-year-old cats, and then I think of all of the other animals in shelters, and I can't decide. I'd adopt every one of them if I could. Actually, I want a farm. That's what I want. Land, and animals and plants, oh my! No wonder the Wild Unknown came up today. This deck is always a good one to use when you want to connect a little to nature, and it seems that I do!

So, how is everyone doing today? Yesterday, our good friend the 10 of Wands showed up. I imagine it was an expression of some of the typical "case of the Mondays" that most of us feel: the uphill climb and the weight of all of the challenges on our plate, but that was yesterday. Today, the 4 of Swords came up almost to say, "I know yesterday was tough, but guess what? Today you should rest. You deserve it!" I mean, look at that little lamb. Isn't she sweet? I do feel alarmed by the swords hanging over her head, but I don't think that it bothers her. The swords represent the thoughts on her mind, and she has used some sort of Zen meditation to allow them to float harmlessly in perfect balance above her. She will pick them up another day, for today, she rests.

The 4 of Swords is ruled by Jupiter in Libra, "I balance my optimism and I expand relatedness." The 3 of Swords is the previous card in the cycle. Though it rules the intellect, it often represents heartbreak. Honestly, I see it as merely the thought that your heart is broken, but that is a discussion for another day. After experiencing the 3 of Swords' mental anguish, we are given a reprieve. The 4 is a very stable number and gives us permission to stop and rest for a little bit. The optimism and expansion that Jupiter brings tell us that we REALLY need to rest now and Libra tells us that it would be best to spend this time relating to our self. If you don't take the time to rest and put your thoughts back into balance, Jupiter will force you to do it in such an epic fashion that you will be paying off hospital bills for the next year. Basically, make a choice to call in sick when you're well, or a friend will have to call in sick for you because you're are very much NOT well. The Lenormand Garden has made an appearance to support the sentiment further. The Garden is seen as more of a public garden and often represents society or gatherings. It also represents the immune system. You're body may be fighting something off, and you might not even be aware of it. So, take a mental health day! Rest and rejuvenate your weary mind. You can get back out into the world in fighting stance tomorrow.

Have a restful day, everyone!