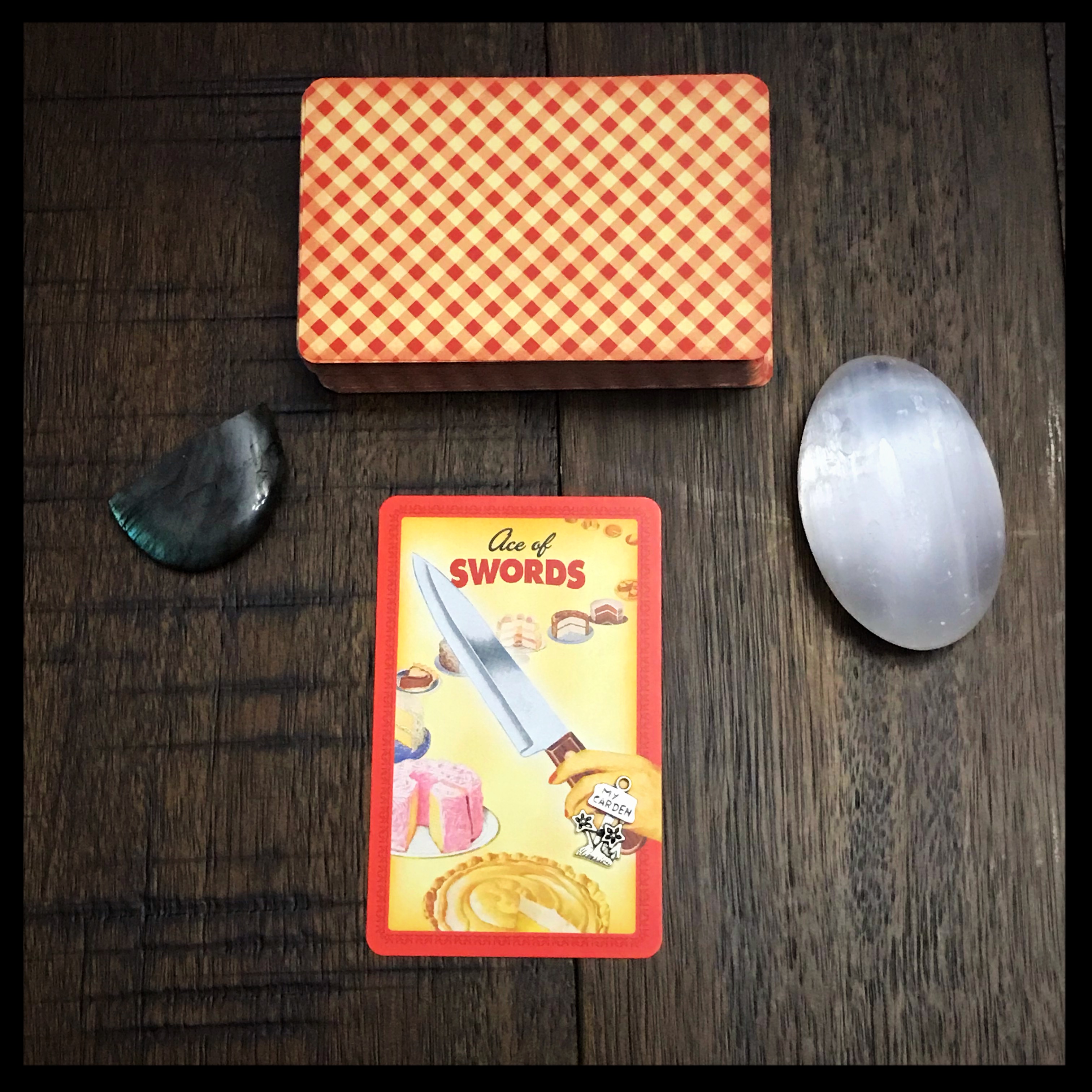 It seems like ages ago that I first talked about The Housewives Tarot. It was way back on November 21, 2018. I said it then, and I'll say it now, this deck is a hoot, so I love that it was the deck that came up today. It's also incredibly fitting. I woke up bright and early this fair morn, slipped on a housedress, and spent the entire day scrubbing down walls and cabinets. I always want to start the new year with a fresh start and with a holiday party coming up, I have a lot to do.

Today's card of the day for my daily draw was the Ace of Swords. I see Aces representing new beginnings. The Ace is just another way of saying "One.", which is a powerfully driven, phallic number. The first sign of the Zodiac is Aries, and we covered him quite a bit yesterday in all of his assertive glory. In the Major Arcana, the Number One is the Magician, a masculine showman who has studied extensively to show off his knowledge. He's overt with his power. With the Ace, we have all of that and more. Paired with an element, the action of One is focused on the element of air. Air in Tarot is represented by the Swords, or in the Housewives Tarot, a knife, an implement of defense and destruction and a perfect symbol of intellect. Have you ever gotten into a debate and felt you were cut into ribbons by your opponent? That was the sword. A sword cuts through the BS.

Astrologically, the Ace of Swords is ruled by all of the air signs: Gemini, Libra, and Aquarius. "I communicate," "I relate," and "I know." If the Ace of Sword were a person, he would be an extremely talkative intellectual that has started a new class or mental pursuit and is very vocal with how much more he knows than the average person. Hmmm. I've just started a new course and talk about it with everyone...but let's not forget about new beginnings!

The Ace is a symbol of new beginnings, and in Swords, they are in regards to the mind. In some decks, like The Housewives Tarot, Swords represent "strife" so it could go either way here. Sometimes we put ourselves under serious mental difficulty from the negative thoughts that go through our head. Sometimes being overly communicative (aka a gossip) can get us into trouble. Much of the cards in the story of the Swords are like that. Words and thoughts can cut. Think before you speak and for goodness sake don't share every idea that comes into your head. You'll save yourself from a lot of cuts down the road.

As much as I'd like to think that this card today is about a new mental pursuit I believe it may actually be about new upcoming challenges after all. The Lenormand symbol that came up today is the Garden. The Garden is representative of the community. Think of a public garden where all can gather, and you've got the feeling of the symbol. Often times it represents a party or invitation to a party. In my case, I am cleaning my house like a mad woman because I'm hosting a party on Yule.

So what is the Ace of Swords really about today? I think it represents a social gathering filled with people that you may not know. An opportunity may come up (or came up. I'm posting late) which will allow you to exchange ideas with like-minded individuals, as well as others that may not exactly share your thoughts. Regardless, meeting new people is a great way to understand more about yourself and help you connect to your ideas. Whatever happens though, always remember that words can cut. Definitely cut through the BS but be kind or else it may come back to hurt you, possibly in the form of the 10 of swords.

I hope you've had a good day everyone. Enjoy all of those party invitations that are rolling in. It's a great time to celebrate new beginnings!