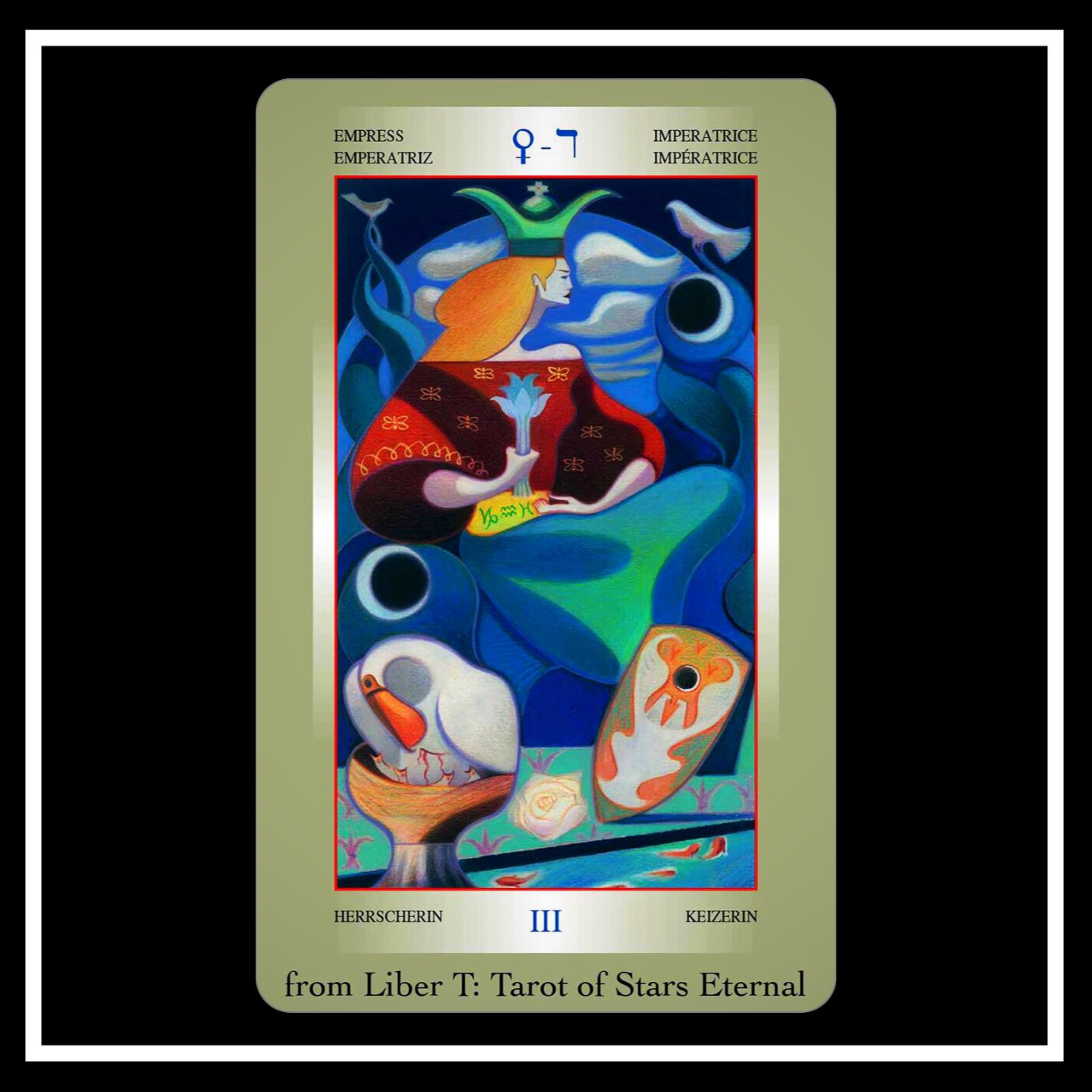 Since it worked so well yesterday, I’m doing it again today! I'm using the Fool’s Dog Sampler. Actually, life got in the way, and it's late, so I will refer to my Tarot Apps.

Today the sampler deck is the Liber T: Tarot of Stars Eternal released by Lo Scarabeo and illustrated by Andrea Serio with book by Roberto Negrini. The Liber T pulls upon the teachings of the Golden Dawn and Aleister Crowley’s Thoth Tarot. I have not worked with a Thoth deck, but Aeclectic has said, “The majors (of the Liber T) are very similar to Crowley's Thoth, but the minors have been expanded and have an emphasis on Decans.” Decans are the 3 ten degree sub-rulers of each sign of the zodiac, so I’d probably actually really like the Thoth.

I like the look of this deck with the use of oil pastels, which allows for a softer, but vivid Abstract style that is a feast for the eye. I’ll want to do some research on Thoth decks, but if I were to start somewhere, this might be a great place to begin. Also, if you speak a European language other than English, a Scarabeo deck may be for you because the company usually releases its Tarot Decks with Spanish, Italian, German, French, English around the borders.

Now, on to the card of the day: Number 3, The Empress. I don't know if you noticed, but we have gotten a lot of 3s lately. Along with the Empress' ruler Venus, this is a big sign to work with others to be more creative! Venus rules love, creativity, creation, art, and all things growing and beautiful. She is the vision of "woman" and polar-opposite of warlike Mars. It doesn't mean that she's all flowers and sunshine though.

As you can see in Liber T, the Empress has a shield lying amongst the roses. "Hell hath no fury like a woman scorned," so saith Medea. She ought to know, she loved Jason with every part of her being, and as deep is her love was her bitter hate. There is a fine line, you know.

As much as Venus loves, she also creates. I haven't talked about it before, but every Major Arcana card also has a Hebrew Rulership. From my understanding, the translations of the Hebrew letter used are from ancient Hebrew, but my Israeli friends may have something else to say about that. I'll have to ask. The Hebrew letter for The Empress is "daleth" or "doorway". The Empress represents a gateway for all areas of existence, body, mind, and spirit, and through her comes a new life. She is with every mother as she brings a new child into the world and with every artist that births a new piece into being. Sometimes people refuse to open the door because they don't know what lies beyond, but if you don't try, you could be missing out on something amazing!

Overall, The Empress is a beautiful healing card. This archetypal mother figure continues to remind us that we should nurture our creativity with love and one day you will have a garden.

I hope your day was one that brought love and creativity and that you stepped through that door! Until tomorrow!