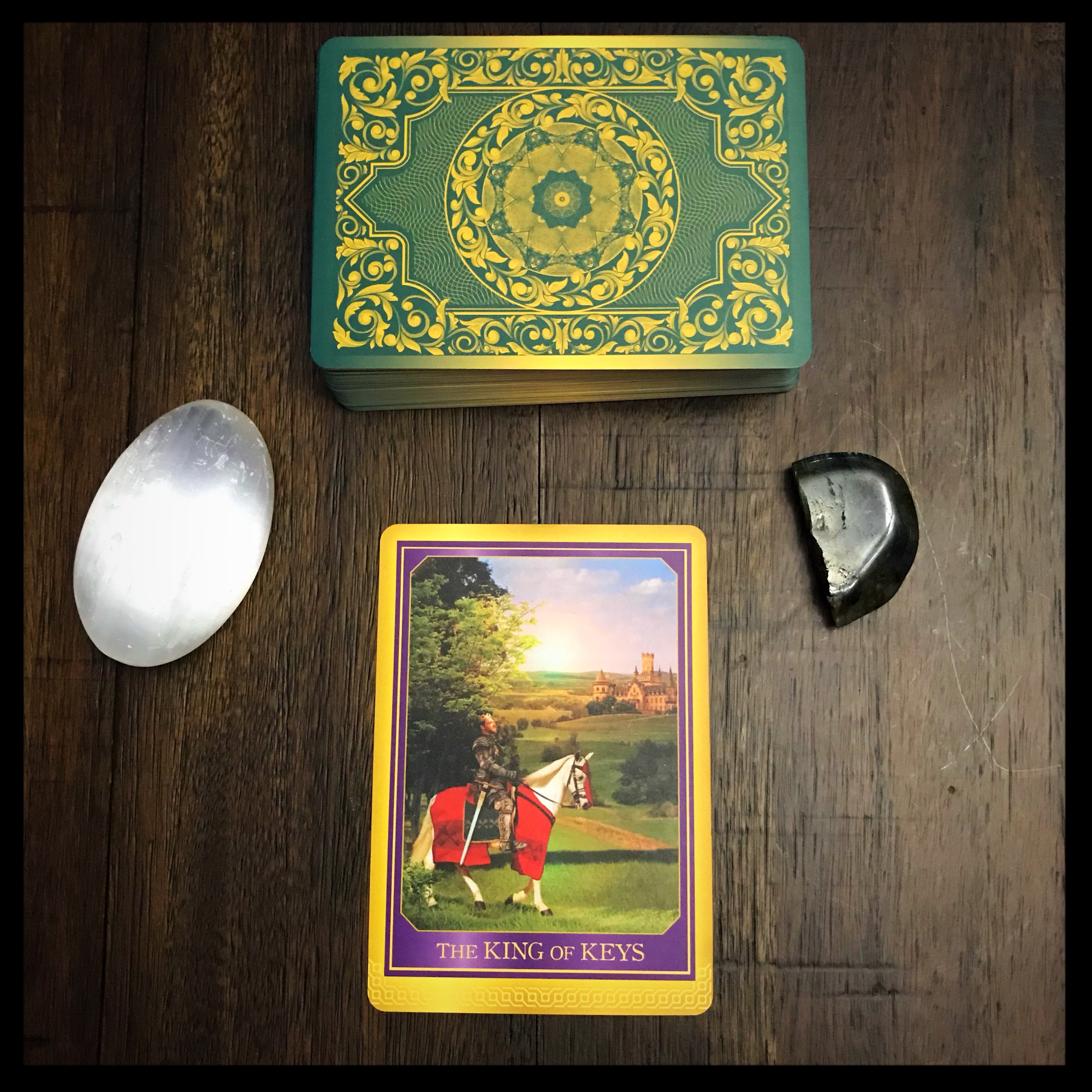 Today is a little different. I've pulled a card of the day, technically from a Tarot deck, but the deck is unlike any of the others that I own. I'm a Rider-Waite-Smith gal, and this deck is not. The authors, Sharon Anne Klinger, and Sandra Anne Taylor have experience with the Akashic Records which they describe as "great fields of wisdom and power that transcend time and space." I visualize the records in a great cosmic library. I'd like to spend more time there, so it was very nice that I received this deck for the Winter holidays. Sharon and Sandra believe that working with the cards will help a person access the wisdom of the Akashic Realm which is "available to all."

At first glance, the Akashic Tarot is an Oracle. Its cards are oversized like an oracle deck, but the authors have chosen to call it a Tarot because it's still laid out the same way and based on some of the oldest Tarot decks from Germany and Switzerland from the 15th and 16th Centuries. Those decks, like the Rider-Waite-Smith, all had a Major Arcana, four suits and a court for each suit, but the symbolism was different. According to Sharon and Sandra, Italian Tarot, the inspiration for Rider-Waite-Smith, uses suits that reflect the different castes of society: swords for Knights and nobility, clubs or staves for peasants, cups or chalices for clergy, and coins or pentacles for tradesmen and the commercial class. They decided to go with a deck more similar to the Swiss and German decks because "there are no elements of destructive weaponry." It's true, the symbols that they use are "Scrolls" for the mind, communication, and study, "Roses" for personal relationships, emotions, home, and family, "Keys" for wealth, career, and achievement, and "Forces" for energy, consciousness and the Natural Law. There are still 22 cards in the Major Arcana and only 40 in the Minor Arcana. With fewer card with different images, it's a lot to get used to, but so far I am optimistic and learning a lot. Some of the cards have spoken to me deeply with familiarity, and it's been relatively easy to think about ways to use them to help me attune to my higher-self and secrets locked in my past, but I found that it also does a pretty decent job of taking snapshots of current day to day issues.

So what card did we get today? The King of Keys. Here a king supported by his white horse of purity looks over his domain. The sun is shining, the grass is vitally green with the hope of new life, growth, and springtime. The king wears armor that shows that he has just returned from a battle and his horse is dressed with the colors of red to represent drive and determination, and green for health and longevity. Despite the war, the gleaming king seems gleeful with the dawning of a new day and looks forward to a bright future. In the Lenormand, keys represent, "the answer.” I see them as a way to unlock doors to our potentials. This King is the master of opening doors. His positive leadership will take you towards success and significant prosperity. He looks as if he has had a long journey and it’s not over yet as there is still a long way to get home, but the journey is almost at its end, and the King can take you there.

Who is this man (or strong female) in your life? Look towards your mentors, parents, and teachers to help guide you. Or maybe you are the King of Keys? If so, it’s a big responsibility to be given a set of keys that open many doors. It’s a respectful position so don’t take the job lightly. You can be the person that will help others find that room that contains their future inside. Help them achieve their career goals, and you may also find it easier to obtain yours. Be prepared to fight for your domain, but remember, if you do it with a smile, you will come out of the battle shining.

Have a good one everybody!