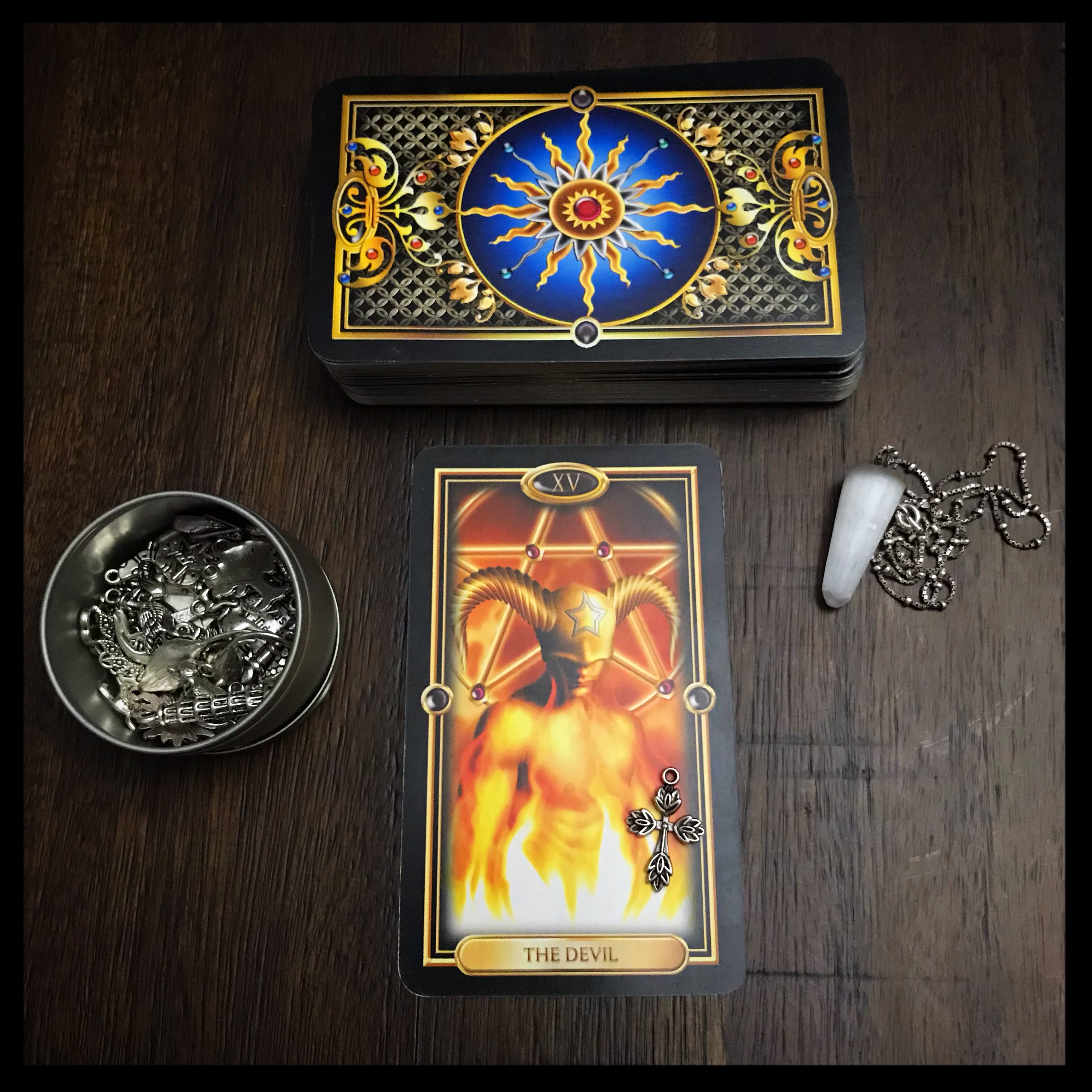 I don't know how you feel about it, but today looks like a fun day! The Devil is making his first appearance in our Daily Readings, and he usually doesn't disappoint. I think the Devil scares people a little when he shows up. The only other two Major Arcana that frightens people more is Death and The Tower, both which not so coincidentally mean "change." It's possible that the reason that the Devil seems so scary is for the imagery. Today's deck, The Gilded Tarot by Ciro Marchetti, shows the devil as a sexy firey-man, but often times he shows up as an angry goat-man who has chained two poor naked victims so that he may force them to do nefarious things. This latter image is rooted in Christian Ideology. Another one of my decks, The Herbal Tarot, calls the Devil card "Pan." They know what's up. Pan was the God of the Wild and after the birth of Christianity, all things Pagan and wild were feared by the Church. Spirituality aside, the Church along with the Monarchy, was extremely rich and powerful and they wanted to keep it that way, but the People would not give up the old ways. The easiest tactic to use was to demonize the People's beloved Gods and Goddesses. Sometimes it didn't work, and they were forced to enfold a Pagan deity into their Christian Saints, as they did with the Goddess Brigid, but other times it worked all too well, as is the case with Pan/ Devil.

Astrologically, The Devil is ruled by Capricorn, a goat symboled sign of the Zodiac. It's a natural pairing really. Capricorn's phrase is "I use." What does that mean exactly? Capricorn is a resourceful earth sign who has his sights set on achievement. I often call him the "CEO of everything." He is a natural born Leader. He may not be out in front of the troops, that would be more of a fire sign position, but he is the orchestrator of the whole war. One thing is for certain, one can not make war unless one knows: how much money is in the vault, how much food is in the larder, and who are friends and who are enemies. He knows all of this because it's his job to know. If ever you need a problem solved, ask a Capricorn. His mental rolodex is filled with people that he has collected along the way for he believes that the key to his success is to put successful and useful people around him. He "uses." I, personally, don't like a user, and I don't like the feeling of being used. If it comes from a humble place, however, I'm happy to offer my time. I think that's really the answer. Sometimes in its most negative pole, a Devil can take hold of you and use you for your time and resources and receive all the credit, but other times a Devil can use you with your permission and offer thanks when the job is done. You are always in control over your life.

What if you want to be a little out of control, though? That's where the fun, Pan type, Devil comes in. Actually, if I were choosing a deity, I'd say Dionysus (or Bacchus in the Roman pantheon) has a great deal in common with our Tarot Devil. Dionysus was the God of Wine and Ecstasy and having a downright good time, honestly. It's said that his followers would get so wild that they would rip each other to shreds. They partied like rock stars with the hangovers to match, but that was their choice. It's ALWAYS our choice. When we are shown temptation it's up to us to decide "hmmm, do I take the cupcake or kale?" I'm all about balance, so I say "Take both! Maybe you can make a cupcake OUT of kale!" Life is not all black and white. Sometimes we "kale," sometimes we "cupcake," but it's up to us to live with the decisions (and possible repercussions) that we have made. With that being said, the Devil, funny enough, also can represent commitments in marriage. It's necessary for us to make bad decisions so we can figure out to how and to what we would like to commit.

So, live it up today, guys! It's a Monday full of possibilities. Watch out for the harmful Devils in your life that may want to use you in some way. If it's unwarranted, (and it very well might be because the Lenormand Cross, the symbol of "burdens" has shown up), stand up for yourself, ask for equal pay, recognition, whatever... or just say "no." You are always in control of your life, but allow yourself a little slack if a sexy Pan or Dionysus arrives and would like to celebrate with you after all of the hard work is done. Whatever you decide, just be prepared to live with your choices tomorrow.

Have a great day, all you little devils!