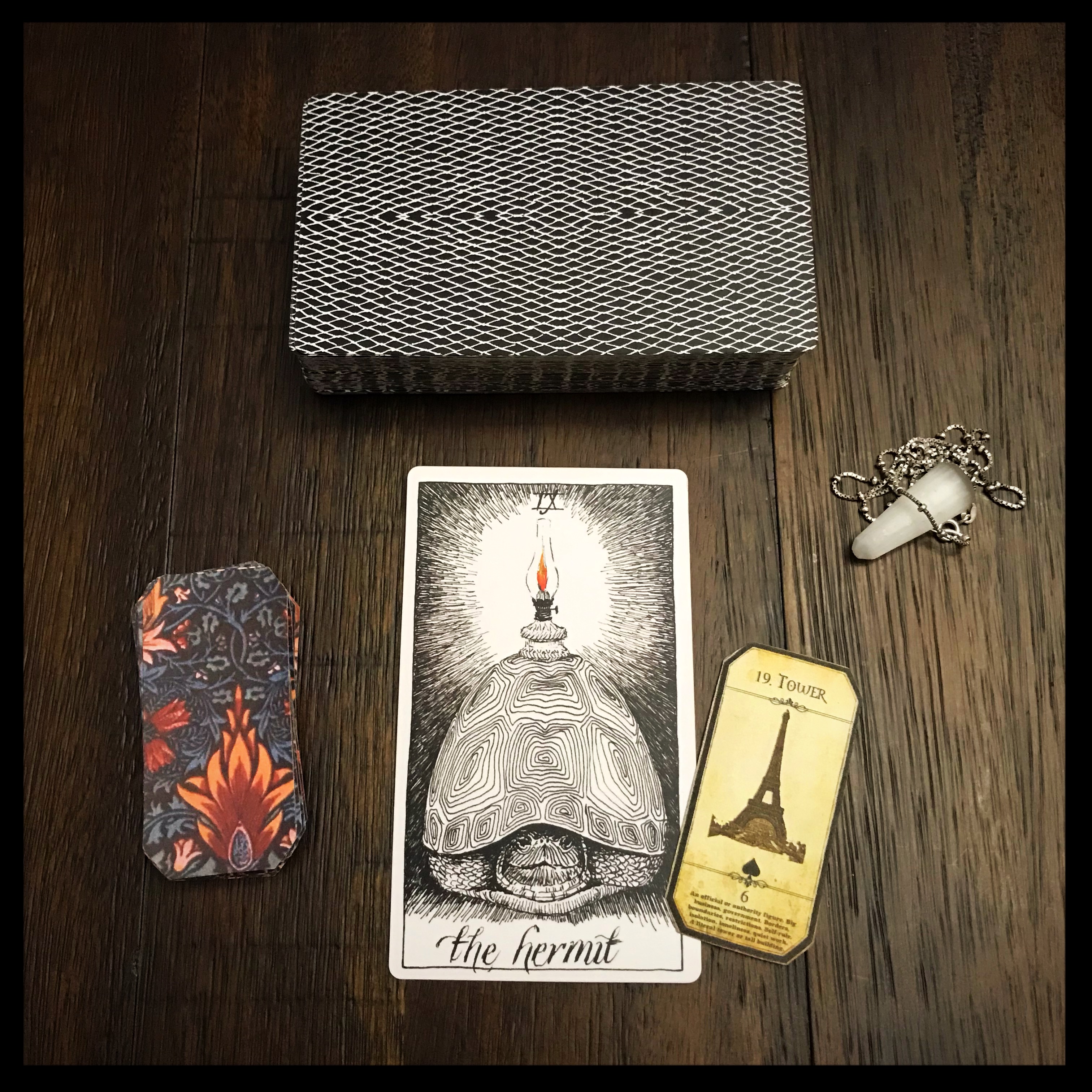 I get so tickled when there is an alignment of energies. This morning my husband said to me, "I was inspired by a certain someone," and he showed me his Legend of Zelda Tarot spread out in front of him with one card turned over. It was The Hermit. When I pulled from my own deck, "The Wild Unknown Tarot" by Kim Krans, I drew a really adorable tortoise, who also happens to be The Hermit.

It is the first time that the Hermit has come up in my daily draws, and I'm pretty happy about it. In the past, I have mentioned the method to find out your Personality and Character cards, (you add the numbers of your entire birthdate to the smallest form and voila!) and mine just so happens to be the number 9, or The Hermit.

The Hermit card depicted typically in a way that you'd expect: an old man with a beard, trudging rocky terrain. I think if anyone ever mentions the word "hermit," this is the visual that first pops into our head. Astrologically, the Hermit is ruled by Virgo, the "virgin." My moon is in Virgo, so I always come to her defense. She's not a literal virgin, but with Virgo's phrase "I analyze," and her element earth with her planet Mercury, she is not one to squander her time or ideas, so she is seen as a bit standoffish. Back when they were doling out symbols for the signs, Virgin actually meant, "not a mother," so it represents a younger, shy and reserved woman who enjoys being alone. Over the years the Virgo Virgin has taken on the meaning of "private." Virgo is private with her emotions, and private with her life. She has so many things to think about, and so much of her life to organize, that she doesn't have time to gossip. She only wants life to work more efficiently.

See, the Hermit isn't about age, but wisdom. He is usually seen carrying a lantern of enlightenment to help others find the way. He won't seek out his students like a Hierophant, but he will absolutely share with them the knowledge that he as acquired in his solitude. A Hermit, like the Virgo, prefers to live simply. It's much easier to compartmentalize when there is less emotional and physical mess. He has removed himself from society to connect more deeply with his ideas and, therefore, himself. In fiction, he is Yoda, Obi-Wan Kenobi, Dumbledore, Gandalf, Miss Havisham, The Doctor...and since the Major Arcana follows the Hero's Journey, he is the "wise man on the side of the road." The Hermit isn't infallible; he has as much to learn from his students as they do from him but he never truly realizes that until much later. He's happy being alone, but it's only when the world comes knocking on his door that he understands that no one should ever shut themselves away in a tower, like the Lenormand card that came up today, The Tower.

I asked my husband what it meant for him to pull the Hermit this morning. He said that he only had one thought on his mind when he woke up this morning, "Not today." In Burbank, California, it's raining and cold, a perfect day to snuggle up in front of the fire for some tea and some writing. We must have Number 9 days. The Number 9 helps us find our happiness in our solitude so that we may find the strength to move on to the last and final step. Look to our Tortoise friend. Doesn't he look snuggly in his house? Whether it's a shell or a tower, I feel like today is the day that you permit yourself to take the time to really get to know "you" in some much-needed introversion. Even if you have a million meetings as I do, you can still find a moment to connect to your internal quiet to get those thoughts (and external life) organized. Then when someone comes a-knockin', you will be ready to share your knowledge and wisdom and hopefully learn a bit more about yourself in the process.

Have a good day everyone!