My adventures with Carob and Clover, and my love affair with Dandelion (Originally written for the East West School of Planetary Herbology Course) 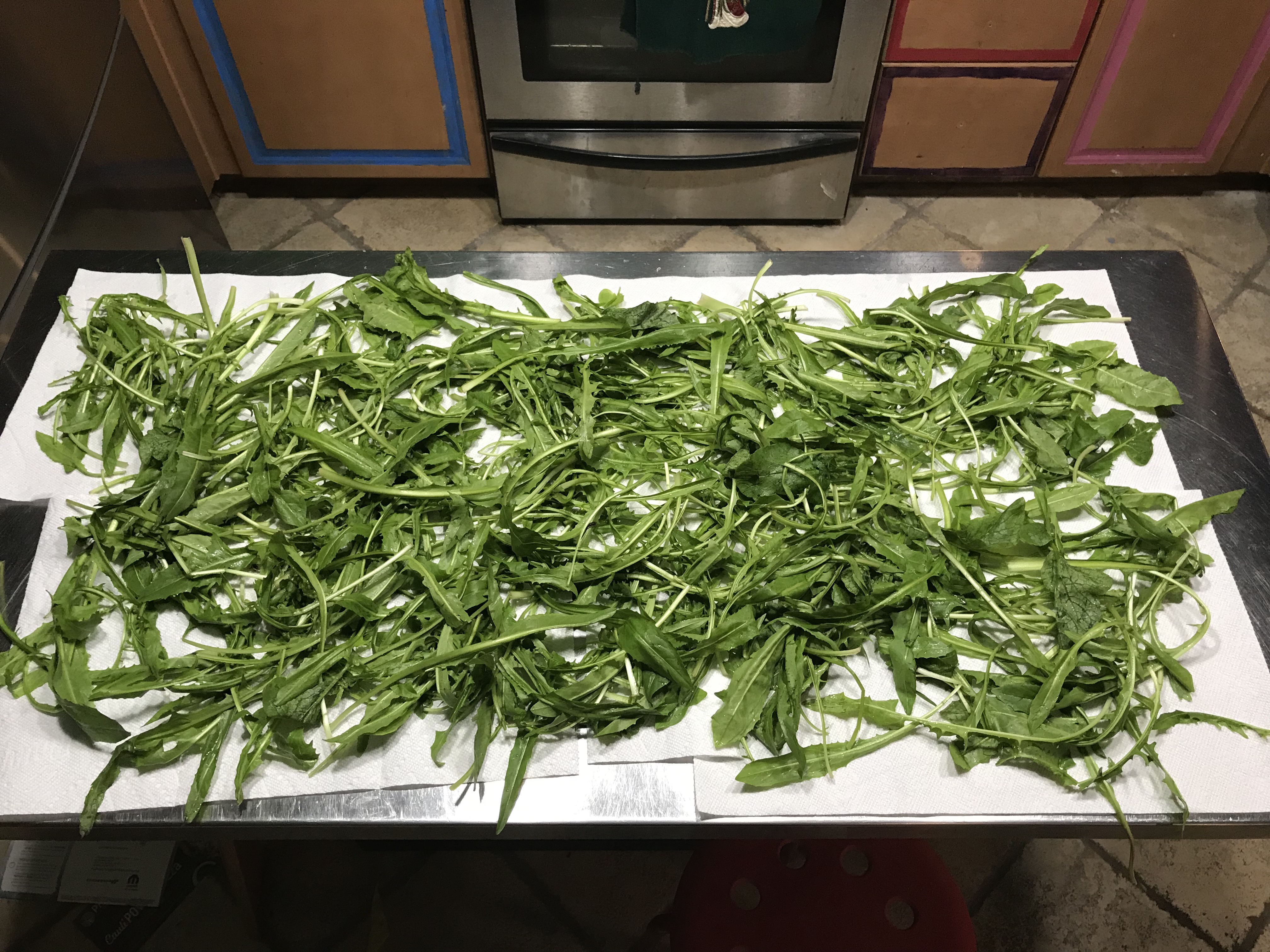 I have had a mental block with this essay. Perhaps I'm in my head. It's not the first time. I started Lesson 3 in December, experimented with all sorts of kitchen herbs, teas, and recipes, and I still couldn't bring myself to write about it. I live in an urban area of Los Angeles, and though we live in a desert, we occasionally get weeds, but they're not from areas that I would necessarily want to forage. I'm always afraid of pesticides or the abundance of dog urine. However, I have very reputable farmers that I've known for 15 years who have the "good stuff."

My farmers have given me fresh and local herbs: basil, bay, cilantro, garlic, ginger, lavender, marjoram, mint, parsley, rosemary, sage, tarragon, and thyme, to list a few. I've dried them in my dehydrator and used them to make teas, but I've also made some oils. Lavender tea helps me sleep blissfully, and rosemary is my new study buddy. Garlic and ginger oil along with the "cold buster" combo of elderberry, hawthorn berry, rose hips and cayenne, has nursed me through a cold. Pairing my fresh and dried herbs with some of my kitchen spices has been a joy. I have also discovered Rose Mountain Herbs and thrown my money in their direction in my never-ending quest to try more. Despite all my fun, I never really felt like I was completing the task. I hadn't found and picked my herbs with my own hands. It felt like cheating.

I shared my feelings with a friend of mine, and she asked, "Would you like some carob?" I haven't found carob in the course work yet, but I'm a huge fan. Years ago I tried to limit my chocolate intake with carob as a substitute, and I found that I liked it more. I knew we had carob trees all over my neighborhood but I never really knew where they were. We found them, and the trees dripped with pods. They spilled on the ground lonely and discarded. I hauled away as much as I could carry and vowed to bring a shopping bag the next time. Not only does carob taste delicious, but it is high in anti-oxidants and is carminative. Babies in Israel are given carob in milk to cure colic. It also contains calcium, iron, magnesium, potassium, riboflavin, and niacin. I have to admit, I had no idea how to take the carob from pod to powder, but the internet is a wonderful place, and it contains every instruction manual you would need. I've used it to make "hot chocolate," pudding, brownies... you name it. When I eat something with carob in it, I feel full and satisfied, most likely due to its natural fiber.

After the carob find, I realized I still didn't really complete my assignment, so I went on another walk. Near the carob trees, a neighbor was up on a ladder taking down his Christmas lights, and the yard nearest the road was a field of white clover leaves. I asked him if he sprayed his yard and he said he didn't, nor did his gardener. I told him about class and how I was supposed to find local weeds and pick them for use and, would he mind if I did? He smiled and said, "You can pick as many weeds as you want." So I got to it. This time I learned that I should always have a pocket knife with me for these chance cuttings. I'll add that to: "Always bring a bag."

When I got home, I thoroughly cleaned the leaves and threw them into a salad. I read that clover could be used as a general tonic to prevent and treat rheumatic conditions, colds, and coughs and could be eaten raw as a depurative with a slightly sweet quality, but my clover tasted a little bitter. I have a sneaky suspicion that my neighbor doesn't know his gardener as well as he thinks he does. Just the thought of eating pesticides turned me off to picking my own again.

Then one day, Los Angeles had a little bit of rain. It sounds worse than it is, but in the alley behind my condo is a mound of dirt that was removed from our patio when we had a major renovation this past summer, and the most beautiful dandelions, chickweed, and mallow popped up. Three plants, with amazing benefits, just sitting out there ready for the taking. I thought "it's been raining, no one has come out here yet. I'm sure they're fine." However, I looked at them and thought, "No, not yet. I think you can grow bigger." After that, the rain poured for four days straight, and I never got a chance to pick them. When I checked them after the rains, it looked as though they had been mowed down by an animal with jagged teeth. I suppose I waited too long. ”No, not yet.”, got the better of me.

I felt disgruntled, but my friends at the farmer's market had the greatest surprise. They had bunches of the largest dandelion leaves I've ever seen. I grabbed as much as I could and brought it home. I soaked it to remove the sand and then placed it in my fridge to use any time. My family now reaches for the dandelion leaves like they did spinach. In the past, I have used Rose Mountain Herbs dried dandelion leaves and roots to make into tea, but I think I prefer the fresh leaves sautéd.

I have always loved dandelion and their magical floating seeds that granted wishes. I think all children do. When my youngest son was a toddler I asked him what he would like to wish for and he said, "I wish for my seeds to grow into more dandelions." I've always felt the same, but I had no idea that I would love them so much as a healing food. What I'd like to do now is grow them myself. Then I know exactly where they have been and the care that they've had. The next time I find one ready, I'd like to make a wish for more dandelions and blow some seeds around on my back patio. I’d also like to grow other “weeds.” Maybe I’ll grow the chickweed and mallow that I never had a chance to claim. I haven’t had any luck with any other plants but I think the heartiness of the weeds will help them fair better and they’ll be happy, and my family will be happy to have them.